A small island 16km south of Southampton or a short hovercraft ride away from Portsmouth offers the potential of being a nice bank holiday destination for those living in London and seeking a bit of time to relax away from the crowds and enjoying a bit of countryside. We have spent our late May bank holiday doing exactly that Simply put, if my opening statement is exactly what you’re after, go for it! 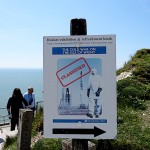 At The Needles
The "war zone" 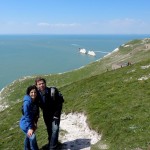 The Needles Battery park
Beautiful walk along the white cliffs


The nature of the island is remarkably beautiful. One gets to see the beautiful white cliffs like those in Dover. There is plenty of green everywhere and there is surprisingly also small fauna in the tall grass, e.g. you get to see rabbits jumping along the road, which can be hardly found elsewhere nowadays in England.

The life on the island is set in its own pace and the pace is quite slow. Sports cars can’t make much sense there as one can hardly drive faster than 30mph. The roads are narrow and the towns are small. With 140K inhabitants and 384 km sq. of land, it’s easy to get away from people if you wish to do so.

The concept of a nice stylish British pub is prevalent. In fact, we haven’t found any alternatives. Should you have any food intolerances or allergies, then you’re in a definite disadvantage. Asking for a soya milk, gluten free bread, or anything else non-standard is sort of speak “pushing it” a step too far.

It doesn’t necessarily demand high observation skills to notice that the service quality is on average quite low. To give an example, asking at a reception of a 4* hotel about the sightseeing highlights on the island returns effectively no answer. There might be effectively no more than five different attractions really, so even for those who simply don’t care, it shouldn’t be brain damaging to give it a quick read and be hence a bit useful.

The place is great for those who have kids. There are plenty of attractions to see. For instance the island’s landmark – “The Needles” – doesn’t purely offer the natural beauty alone, but an amusement park, hot dogs, ice creams, double-decker that addresses the danger of having to hike 1km up the hill, etc.

I don’t think we’ll be coming back anytime soon, but we truly did enjoy our three days on the island. The highlights were clearly the beautiful walks along the white cliffs with great visibility in every direction.