The weather on Day 3 has unfortunately gone slightly for the worse – chilly, foggy, drizzly. We were determined, however, to continue our mission in proving to New Yorkers that Subway is overrated and unnecessary. This time we set out to explore the north-west area that spreads through the Garment District, Theater District, Hell’s Kitchen and the Upper West side. Apart from Hell’s kitchen, all these zones seem to be appropriately branded, so that one always knows what to expect. I’d rather not investigate what you are to expect in Hell’s kitchen though … 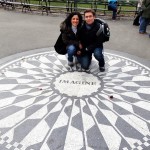 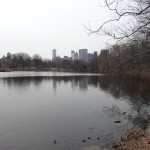 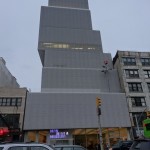 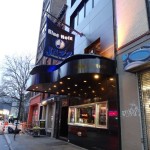 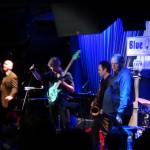 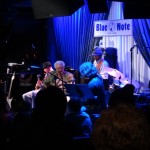 
The Lincoln Center is THE place in New York to watch performing arts (apart from all those played on Broadway I guess). We have only checked the architecture of it from outside. Looked nice, but not necessarily the highlight of our trip I’m afraid. Walking a few streets up and another building to photograph appeared – The Ansonia. Nice building, but nothing ground-breaking for those who come from historically gifted Europe. Let’s move on. The Dakota Building where John Lennon lived and was also assassinated in 1980 is a couple blocks away. Just across the street there is a Strawberry Fields memorial where we took a few photos over the “Imagine” mosaic.

The Natural History museum would have been a great fun, but we unfortunately didn’t have the time to see it. It’s on my list of future to-do’s. Instead we went on to across the Central Park and returned back down to Midtown Manhattan alongside the 5th Avenue. There was another ridiculously nice Apple Store on the 5th, which of course, we couldn’t miss.

At 1pm we had an appointment scheduled with Hilton Vacations representatives. In exchange for a considerable amount of HHonours points we were to give a testimony to Hilton’s loyalty programme, except that the ask was totally different. We were instead told about Hilton’s shared property programme at the end of which we were asked to dish out thousands of dollars and invest. I’m sure the intentions were great, but somehow didn’t feel (a) realistic, (b) real and (c) acceptable given we were on holiday and nowhere near thinking how to spend our next few years’ fortune. So the answer was “No, thanks!”, but the points will be useful.

As much as we love our walk experience, time was of essence yesterday. And so we finally made use of the NYC Subway. In the afternoon we arrived at Spring Street and from there we walked all the way through Little Italy, Chinatown and eventually ended up our evening at the famous Blue Note jazz bar.

There were two bands on the program – Kyle Eastwood band (the son of Clint Eastwood) and Larry Corryell band. Kyle allegedly composes music for his father’s blockbuster movies. Larry Corryell and his sons came after with jazz guitar fusion. Very interesting too, especially Larry’s son Murali seemed to be a all into blues (which is music I adore). We got some amazing tunes and great atmosphere out of it – loved it!

Our walk back across nearly the entire Manhattan was nice, but tiring. We dropped dead tired first thing we got back in the hotel.